Boatbuilding has been an essential industry in Oman for centuries.

Among them is a scale model of the celebrated Jewel of Muscat – a reconstruction of the kind of 9th-century Arab trading ship which the legendary Sinbad would have used on his adventures.

Other displays show how these ships were built using techniques very different from European methods.

The exhibition also tells the extraordinary story of how the visit of a French naval officer to Oman, nearly 200 years ago, played a crucial role in preserving vital information about the design and construction of these boats – and is even allowing them to be rebuilt today.

On display will be drawings and models of many different kinds of Omani boat such as the sleek badan safar, and the majestic gharukah. These have been recreated from the elegant drawings and detailed plans drawn by Vice Admiral François-Edmond Pâris during his visit to Oman in 1838. Those drawings and plans are also on show in a unique interactive display.

And there are displays demonstrating the ingenious techniques and tools used by Omani craftsmen to build ships without using a single nail - by sewing the ships planks together with coconut fibre rope.

Each of the model ships is crafted with extraordinary precision and detail, but perhaps none more so than the Jewel of Muscat. Stitch for stitch and plank for plank, she recreates to scale the full-size ship built in Oman four years ago, before her epic sailing voyage in 2010 from Muscat to Singapore. 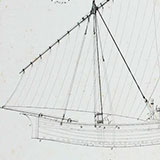 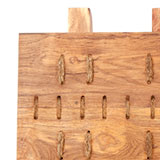 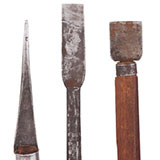 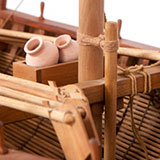